In the book The Velveteen Rabbit, we read that toys magically becoming Real due to love from children.

I was visiting my youngest son and stayed in his guest room in the basement.

He has a bookcase down there with most of the books he has collected over the years, including his collection of Calvin & Hobbes anthologies.

I was happy to see that he had not thrown them away after he got older.

Calvin has a vivid imagination (my kind of guy), and has a stuffed tiger doll who becomes a real tiger, at least in his imagination.

Calvin also has a crush (although he denies it) on fellow classmate Susie Derkins.

Before I went to sleep that night I pulled one of the C&H books off the shelf and read many of the cartoons (I am also a fan, as are both my sons, and I never get tired of reading the same cartoons over and over).

Finally, I put the book down on the floor and went to sleep.

Bright & early the next morning his children peek around the corner to see if I am awake and then come running into the room and onto the bed.

They spot the book on the floor and ask what it is.

I explain that it is about a boy with a great imagination, and that imagination is more important that knowledge (a quote from Albert Einstein).

They ask me to read it to them, which I do, with them swapping places on my lap.

I explain in each cartoon what is “reality” and what is Calvin’s imagination.

They are loving it!

One cartoon that they want to be read over and over is when Calvin shouts: “Hey Susie Derkins!  Is that your face, or is a possum stuck in your collar?”

They repeat that over and over, giggling each time.

Having them enjoying a book that both their dad, his brother and I have treasured over the years is really special.

Soon their dad comes in to see what all the laughter is about; when he sees what it is, he smiles.

After that morning, those books became constant companions, on the living room floor, on the road, at play dates, in the hospital, and provide many magical moments of bonding time.

While it is tempting to discard stuffed animals, toys, books, rocking chairs, pictures, etc. as children get older, legacy parents look to the future and the possibility that grandchildren, nieces, nephews, will come along … and sharing memories with the next generation. 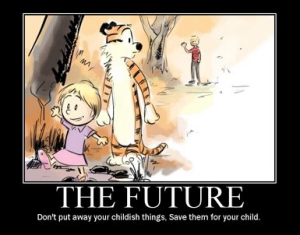