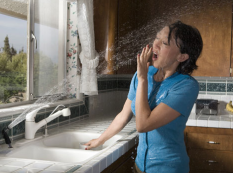 Do you believe in Karma?

Think of an array of giant dominos in front of you; you push one and it falls into the next one, then, after a while, a giant domino behind you hits you on the back of your head!

The dominos traveled in a giant circle and voila!

I should have known it would happen when one April Fools day when our two were about 4 and I explained to one of them (I know which one, but the statue of limitations has not yet expired), what April Fools day was.

He wanted to participate so I whispered to him to go up to his mother, who was still in her panties & a sleep shirt, and what to say.

“Mom, your panties have a hole in them!” he said.

“What!  Where!” she asked, looking frantically.

We got her!  She never suspected that her innocent son was a prankster.

Fast forward to when he came to live with me prior to going off to college.

I come in one day after work and turn on the faucet to the kitchen sink.

I immediately get sprayed in the face!

He had scotch-taped the sprayer to “on” and aimed it directly to where he knew I would be standing.

It took me exactly 1 nanosecond to know what had happened, how it happened and who was the culprit!

Karma had finally caught up with me, all those years later. 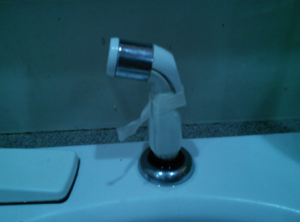