Nursery Rhymes can leap off the page and become a combination play-time & aerobic workout with a little creativity!

Maybe it was inspiration, or an antidote to boredom, or a creative adaptation from “riding on a horsey, riding to town”, but one day I decided to work on my abs and arms while simultaneously playing with my twin boys.

I would lay on my back on the floor, place one of them on the bottom portion of my legs and hold them with my arms.

Then I would recite the nursery rhyme for “The grand old Duke of York”, while raising and lowering my legs.

At the end of the rhyme I would carefully flip my son over my head, tightly supporting them and gently placing them on the floor above my head.

Our sons loved this, squealing in delight, and asking for more.

It was a multiple win: play-time, bonding-time, memorization-time and work-out time.

“The grand old Duke of York, he had ten thousand men, he marched them up the hill one day” (raise child using bottom part of legs)

“then marched them down again” (lower child back to starting position)

“and when they were down the were down” (lower child again).

“but when the were half-way up” (raise child half-way)

“they were neither up or down” (raise child the rest of the way up, then flip them over for a repeat)

I am certain that the writer of Mother Goose Rhymes never envisioned this action-adaptation! 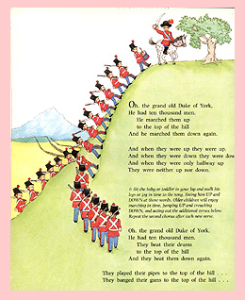