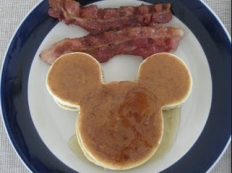 I told my twin boys the same story that my Aunt Betty told me: “Learn how to cook, because you don’t know how long you will be single!”

I added my own spin to it, telling them that when they got older they would probably go back-country camping with their buddies and would have a choice to either cook or wash the dishes and pans in a nearby stream.

I told them the washing the dishes in the stream was to be avoided at all costs!

One of the items that I taught them was how to make pancakes.

They learned how to do that quickly, and enjoyed doing it.

Imagine my surprise when they got bored and decided to get creative!

You might call it “playing with their food”, but I felt it was creative cooking when they started making “Mickey Mouse” pancakes (one big circle for the face and two little circles on top for the ears).

This led to dinosaur pancakes and Picasso pancakes (I couldn’t tell what it was, just like a Picasso painting!).

As you can imagine, they are both great cooks today, especially on the grill.

They also have encouraged creativity and curiosity in their children, in more ways than just food preparation.

P.S. Did I mention that they both like BACON! 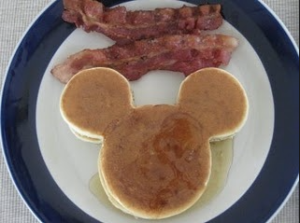 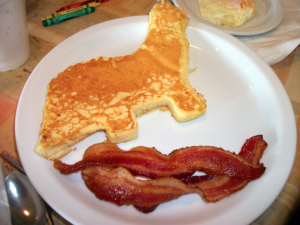