I don’t remember why I was grounded, but I do remember that it was selective grounding.

I could leave the house, I just could not drive the car.

We walked in the dark back to my house.

The temperature was ideal, just cool enough to be invigorating, and we held hands and talked as we made the journey.

Once we were inside we went to my room and talked some more.

It was almost time for me to take her back to her grandmother’s (she had a curfew) when the storm of the century hit!

Rain was coming down in buckets!

As we walked to the door my Aunt told me that she and my Uncle had decided to make an exception to my being grounded without a car since the weather was so bad.

“No. You said I was grounded and that is that!” I replied. (I was still mad about being grounded in the first place).

My girlfriend gave me a look that said “Are you crazy?”, but I grabbed her hand and out the door we went.

We were immediately drenched, but after a while it didn’t matter.

When we arrived at her grandmother’s house we looked like drowned rats!

There was not a dry place on our bodies.

Her grandmother looked at us is disbelief, smiled (ah, young love) then had us come over to the gas stove to dry off.

I walked back to my house in the rain – entered into my house – triumphant!

P.S. That “girlfriend” is the mother of our twin boys! 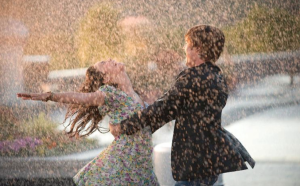