Our youngest was in college, living in the frat house.

I was living 3 hours away and decided to visit him for the weekend.

His room was what I expected, similar to my own experiences living in a dorm room.

I had worn the same white jeans for two weeks without washing them until my roommate insisted that I take them to the laundromat or he would burn them!

What I did not expect was the condition of the community shower.

Obviously, no one had taken responsibility for cleaning the shower.

I could tolerate some mold on the shower walls, but there was so much ground-in dirt on the shower floor that I felt that if I stepped on it I would instantly die!

I cleaned off a spot with some toilet paper, scorched the area with hot water to annihilate any toxic germs, and showered in record time.

When I mentioned the condition of the shower to my son, he agreed that it needed cleaning, but I got the impression that the frat-house strategy was to move to another, cleaner house, rather than clean the one they were in.

That was my first and last visit to that frat-house.

P.S. Maybe that was the strategy to keep parents away. 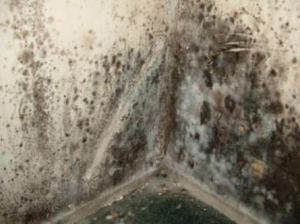